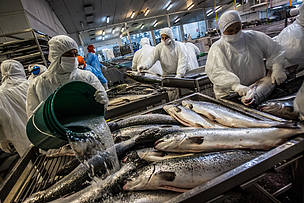 The GSI Sustainability report released this morning tracks the progress of its 12 member companies from over the last three years (2013, 2014, 2015). The report shows that over 70 GSI salmon farms have been certified and that another 35 more farms are currently under assessment.

“These are encouraging results and we trust that the 35 farms under assessment will become certified later this year, said Piers Hart, Global Lead for Aquaculture at WWF.  Globally, ASC certification has reached a milestone with more than 200 farms certified in 24 countries today, among which salmon can be counted as the top ASC certified species with 84 farms certified. “This is great progress. We would like all farmed salmon companies to join the GSI and become ASC certified, making sustainability a pre-competitive issue,” added Hart.

Global aquaculture produces almost 60 per cent of the world’s salmon, an industry worth US$5.4 billion per year. GSI members collectively produce around half of the world’s farmed salmon. As such, the GSI was created in 2013 with the support of WWF and has the overall aim of reducing drastically the negative impacts of salmon production on some of the world’s most ecologically important regions.

“I can only applaud the GSI for holding its members accountable for progress, benchmarking their performance and reporting the results publicly,“ said Richard Holland, Director of WWF´s Market Transformation Initiative. "My hope is that other platforms, such as the Consumer Goods Forum, will follow this example. WWF calls on CEOs taking part in the CGF meeting 15-17 June in South Africa to strengthen the platform’s commitments to transparent reporting on critical issues, such as the sustainability of seafood sold by its members.”


The Global Salmon Initiative Sustainability Report can be found at: http://www.globalsalmoninitiative.org/sustainability